“Once upon a dream, I fancied fairy tales and fantasized the type of life that little girls believe someday might be theirs. I held in my heart that my true love would arrive on a white horse and whisk me away to a happy-ever-after-life in his castle where he would be devoted to me forever and ever.”

The schmaltzy archetype and allegory of what love and romance should look like were emblazoned in my heart during my childhood era through movies featuring Elvis Presley and stunning leading ladies.

Fondly, the first movie memory I cherished with my mother and Grandmother Hathaway was Blue Hawaii. My grandmother, the Pentecostal church-going-grandmother, could not be seen going into the house of the devil to watch a handsome dark-haired young man on a big screen thrusting his pelvis to the rhythm of rock and roll, so we furtively looked each way to see if there was anyone she knew observing her before entering the theatre. It was a romantic comedy with music to swoon by, culminating with Elvis singing the Hawaiian Wedding Song to his bride as she chanted her answer back to him in Hawaiian dialect. Subsequently, other movies with Frankie Avalon and Annette Funicello in a franchise of Beach Party films left incredibly indelible impressions as I idolized my older brothers who personified the characters I saw in the movies as they dated their pretty girlfriends. These images shaped and romanticized part of my childhood while living vicariously through what my older siblings did. Before I delve into the individual memories that I hold of my family, I will begin with my narrative as intertwined with my mother’s story. 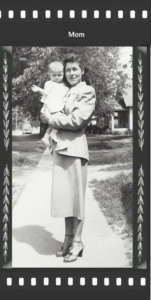 Beauty and perfection was my mother’s obsession; she modeled herself after screen stars of her era: Joan Crawford and Bette Davis, Hedy Lamarr, Vivian Leigh. These were stunning women in the 1940s with their perfectly coiffured hairdos, and couture dresses capped with squared shoulder pads to create the symmetrical hourglass body shape. It was said by my eldest brother Jim, that mom and her then-husband, Fred Espinosa were as handsome of a couple as Jane Russell and Jeff Chandler.

Coincidentally, coinciding with my mother’s story, I heard in a documentary several years ago that Bette Davis and Joan Crawford’s fathers had walked out on their mothers just as my mother’s father had walked out on her mother and her. The program shared detailed incidents that sounded eerily similar to my mother’s own painful childhood. The reporter stated how hard this abandonment was on the daughters in contrast to their mothers. These women (the daughters) never trusted men again. That happened to be my mother’s mantra, “Never trust men.” 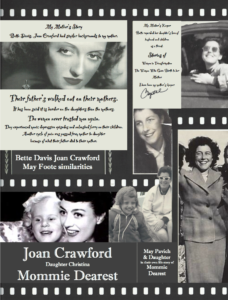 The documentary reported that Crawford and Davis had experienced manic depressive episodes and unleashed fury on their daughters. Again, this resonated another correlation to my mother’s story and now mine. The film, Mommie Dearest (1981) portrayed the life of Joan Crawford unleashing abuse on her young adoptive daughter Christina. The daughter of Bette Davis, B. D. Hyman, wrote a book in 1985 about her relationship with her mother titled, My Mother’s Keeper. It revealed the alcoholism and the emotional abuse that she experienced and how her mother felt threatened when B.D. developed relationships outside of their exclusive-mother-daughter life. There were atypical parallels to mine and my mother’s painful life. 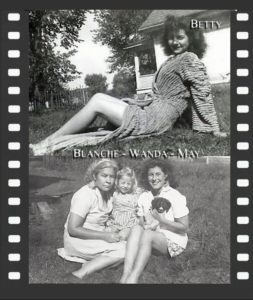 Our family’s vintage photographs reveal the glamour my mother pursued when she was young. It signaled a desire to garner more from life than she had inherited from her ancestors. Her family of origin was economically underprivileged and religiously Pentecostal Holiness. In her mind her father, the defrocked evangelist, a supreme hypocrite. The photos of mom and her sister Betty portray as much beauty and sophistication as could be reasonably obtained with her financial means. Having no model to reflect what functional life should look like, she sought resources outside of her immediate family. She found solace and understanding with her mother’s sister, Myrtle. Her Aunt Myrtle was not the religious type, so she maximized her beauty with makeup and stylish clothing that Pentecostal women were forbidden to indulge, and she freed my mom to do the same. Myrtle became a surrogate for my mom, in many ways instructing her how to be a respectable woman of the world.

Mom suffered her whole life with symptoms manifested as extreme mood fluctuations that altered her state of mind. During her manic states, she was emotionally abusive and falsely accused me of horrid untrue things. In this altered emotional mind-state, she said things and sometimes physically abused me in ways that she later denied when she was lucid. My internal protectors unconsciously defended against such onslaughts of my soul and began shutting down (a state of disconnection) triggering conformity as my protective mechanism. Nearly every day of my childhood, I had to lose a part of myself in order to survive emotionally, although it was at the expense of my soul. My story is woven with understanding compassion of my mother’s narrative while allowing myself to have voice-now for what was not allowed to be spoken-then.