The horizon has always been before me, stretching out with a sustained potential. It offered a promise in a language now foreign to me, yet fluent as a youth. The invitation the horizon extended never waned, and while my fear refused its seduction, it never ceased its wooing.

Carl Jung described the Muse as the “passion that engrosses” us, Socrates interpreted the Muse as the initiator of performance, and Plato’s Ion might lead us to believe the Muse is in the desire of the reader or observer. My acquaintance with the Muse was ever forthcoming, yet I demurred with perennial resolve in demand of agendas that were never my own. When the Muse visits, we alone can be the tragic arbitrator of our longings demise.

For me, the Muse represents that numinous unrest which propels me into the unknown. It was never the horizon that beckoned me, rather it was that element within me that re-purposed my gaze to the horizon. The distance I felt to the potential was a distance I created myself; again to my role as arbitrator.

Our early life is a series of starts; an effort to kindle our life. We have starter friends, starter careers, starter religions, starter homes, and even, in Esther Perel’s assessment, starter marriages. This kindling begins with a blaze but diminishes into the coals that later ignite the tinder we add. Our flame, which is to say our passion, is discovered upon this kindling but all transform to cinders in the end. In these glowing embers is the cauldron that forges our subsequent venture long after the flames have disappeared. 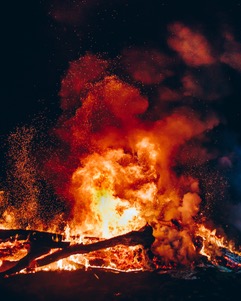 I have aged, but the Muse is ageless, ready to engage again the youth embedded in my soul. It holds no moral alignment, no expectation, no judgment, no intended outcome. Whether acknowledged or not, its energy remains kinetic; an unyielding siren.

In this moment I stand on the horizon, my identity transforming in the wake of savagery, experiencing myself in the searing embers of my forge. I am at the precipice of an undiscovered territory of living, perhaps a wandering of wanting.

Firefly Horizons Under Hummingbird Skies is the tinder of my dormant passion. It is in this place you will find me in utero of discovery, enlivened in evolving identity. I invite you to join me in my serendipitous quest for renewal. Firefly Horizons Under Hummingbird Skies is the Phoenix rebirth of my precipitous passage through the torrid forge of ash, flame, and embers of my rekindled journey. I am in hot pursuit of its energy.

The passionate Phoenix of Firefly Horizons and conceptual prognosticator of Mutatis Mutandis reborn through the scorching forge of his annihilation into creative sanctuary. Steve translates the fury of his Phoenix experience into experiential exegesis in search of perspectives not yet in view. Read more about Steve • Articles by Steve

Use the form below to schedule a workshop, speaking engagement, or inquire about therapy.