Wandering roads manifest in a multitude of form; literally and metaphorically. My wanderlust is rooted in understanding the mystery that is ever before me which proliferated my Seeker’s avidity. Paradoxically, I have come to accept that great questions are an introduction to doubt. “Learning to live with ambiguity is learning to live with how life really is, full of complexities and strange surprises..” (James Hollis). Thus, my odyssey is an inward journey. The warp and woof of my life are pathways woven by a cogent, circuitous-grid providing many access points to my soul. This grid-like passageway positions me with various perspectives to understand more deeply the meaning I forage.

When I began writing my family story over ten years ago, I wrote these words:

“On a deeper, a very personal level, there is another layer which reveals the excoriation of my soul throughout my life. Excoriation in the way that medicine is used to cleanse a wound, often through abrasion or chemical action resulting in healing. This narrative is a journey primarily dealing with the healing of my soul; a ‘reauthoring’ of my life. As individuals, each family member possesses a certain filter in which we view our family and life experience(s). Early in life, I began sensing something vital was missing although I did not have a cognitive explanation for it. My life felt empty. I have always longed for something that I could never put into words. I remember pondering as a young adolescent, ‘Is this really all there is?’ The world looked empty and gray from my perspective. I did not fit in and was expected to conform to others expectations. From deep within this hopelessness, I silently longed for more. Little did I know that essential parts of me were shutting down and tuning-out subconsciously as I witnessed my mother emotionally, verbally, and sometimes physically, abuse my father and me. In this mode of occlusion, I remember the internal-ache as I longed for rescue and fantasized for another life.”

It wasn’t until much later that I realized I would never be rescued. Analogous to Picene Molitor Patel, the main character from the movie, Life of Pi, during his moment of anagnorisis, “I should not count on outside help. Survival had to start with me.” It became obvious as Pi remained alive 227 days on a lifeboat in the Pacific Ocean; God was not going to airlift him out of the engulfing water. Being sustained through the voyage was a baptism of sorts; a baptism inosculated of water and fire. I found my story within his story. The past encounters of the painful journey of my childhood abuses, and later the internal suffering of a divorce, eventually augmented my early stage paradigms. I too, could not count on outside help. In my peripeteia, I discovered God’s role was never to deliver me from my pain, rather he would be ever-present and sustain me through it. Similar to the words of Jacob, son of Isaac, son of Abraham, “Surely the Lord was in this place, and I was not aware.”

In unexpected ways, enduring adversity, I would discover “that” truth and “that” truth would lead me to a different life. Richard Rohr calls it the further journey which comes through suffering. No one willingly enters this type of pilgrimage willing and eventually, I realized it was up to me to grow-myself-up and walk through the dark wood, rather than wait for a knight in shining armor to rescue me. And…oh…how I longed for that knight for a very long time. Where my optimism was birthed fascinates me. Research supports the inclination that human brains are designed with neuroplasticity allowing us a path for resiliency.

Unbeknownst to me on an unconscious level, the internal longing to find God in and through others held implicit expectation; a repetitive compulsion, concerning the unfinished business from my family of origin.  This yearning spurred my voracious drive to complete “that business” through my relationships with others. The weight of this pressure early in my marriage and friendships to fulfill my unconscious internal need for healing created dissonance. Those relationships were not my elixir; nor should they have been.

I am not suggesting that relationship does not play an important role, for it is true that in the early stages of development, critical “attachment” figures are paramount to shaping us. They teach us about life and how to be functional in the world in which we live. They prepare us for our inevitable rise to functional adulthood. The unfinished business of the “little girl part” of me had become too demanding through my unconscious as I awkwardly attempted to fulfill my needs within. By insisting that others make an effort to understand and support my growth, I created more pain. This misunderstanding occurs when those whom we love do not recognize, that we recognize that there are additional stages in which we need to grow. This lack of awareness fosters anxiety and a perceived threat to the relationship by way of misinterpretation and division. The incendiary force that thrust me into the next level of growth would cost me. The strain on my relationships was too burdensome; they could not bear the pressure. I had to let go of the consanguinity of those early-stage affiliations. I could not comprehend this dynamic then, in the way I perceive now. My gawky and graceless egocentric mannerisms (which had accumulated with intensity) reinforced my belief that I was not enough just being myself, and that I was not lovable which fortified those disenchanting parts of me, the shadow and shame which held tremendous leverage over my unmet needs. I could not have named those particular needs then as I can articulate them now with self-compassion and understanding. 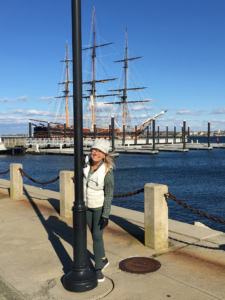 There were many, many painful steps in my discovery process. How many more could I bear? Breaking free from my childhood distortions has taken a lifetime. As I slowly emerged out of the dark cavern of my generational emptiness, I began to see pinpricks of light. The poet Rumi wrote, “The wound is where the Light enters you.” Those early stages of life were a scarcely gilded cage of rigidity and emotional imprisonment. I inhaled and exhaled my “life breath” in a very constricted way that snuffed the oxygen out of my life flow. The journey home for me is “coming home to myself.” That is to say; I am becoming who I am, not what others expect me to be, even if that means I seem eccentric never fitting in the bell-curve. We are designed to be different from everyone else, embodying our unique essence, our haecceity. Our DNA and fingerprints continue to inform us of our incomparable distinctiveness; there is no one else on the planet who is us.

The generational chains that formerly held me captive were revealed through my writings during ten years of unearthing my past pain. Today, I continue to share vulnerably the addendum of my “new testament”; my cartography of healing. I invite you dear readers to a sip slowly with me, partaking in the choicest of nectar as I continue to document the most delectable discoveries of my spiritual and psychological travels.