Vade Retro Me, Satana
~Latin for~
Get off my back, Satan

Welcome to my second installment of My Mother’s Story and Mine. The poem, Old Satan He’s My Dad was an expression of my mother’s heartbreak after being devastated by abuse and abandonment.  My grandmother learned to survive, never truly adapting to the trauma. Newspaper articles reveal how she allowed the abuse cycle to resume upon my grandfather’s short-lived return to the family several times before departing forever.  The era in which they lived did not offer the exterior support that our society has come to depend upon. 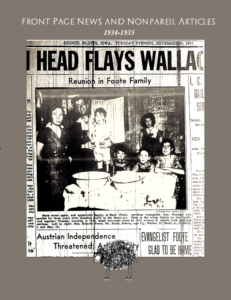 Their lives unfolded with more difficulty. Grandma deserted and ill-equipped to raise support for five children, was fearful. My mother, being the eldest of the five, felt more pressure to assist in child rearing. Their lives unfolded without the strength of a provider and father. They carried the subtle-pain of a tarnished family name. The preeminent thought on grandma’s mind must have been, “How will we survive and who will support us?” On the eve of the New Deal legislation (yet to arrive in 1935), she turned to family members to help her raise her children. My grandfather’s legacy would take a withering toll on all of his children; May (my mom), Walt, Basil Jr, Betty, and John. 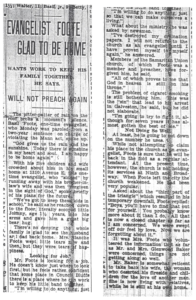 Featured on the front page of The Daily Nonpareil, November 20, 1934, Reunion in Foote Family – with a sub-headline, “Evangelist Foote Glad to be Home.” This event was after Pearl had recently made the news on November 2, 1934 “Straying Wife Sees Her baby Daughter; As Future of Families Hangs in Doubt.” Seven days later; November 9, 1934 “Foote Admits Mann Act Guilt.” November 18, 1934, he pled guilty to the Mann Act.  Astonishingly, after all of this, my grandmother took him back. Soon after, tragically he left her again. Despite the hardship, she learned to endure without Basil and several years later married Seymour Hathaway, the man that allowed my grandmother to feel secure.

Going through mom’s photos revealed a portal of time and revelation on a micro level regarding what could have been our spiritual and family heritage. In 1934, perhaps in the freedom of thought or magical hope still possessed of youth, my mother glimpsed at the life she imagined. I wonder what she gleaned before the wake of disillusionment erased it from her memory? 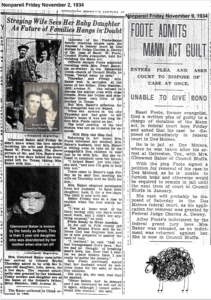 Tragically, my grandfather, when presented with an opportunity of temptation, succumbed to it and fled with his sister-in-law, Pearl Baker. Pearl was a member of his evangelistic congregation. It was a tangled mess; “Brent” Glenwood Baker (Grandma’s brother) was married to Pearl. Brent and Pearl were parents of a three-year-old infant daughter named Lois and two boys. Pearl abandoned her children and husband to pursue life with our grandfather. What a bitter experience for the family as the soap opera was performed live for the city of Council Bluffs exposing the pain and shame via headline news. Several years later, a newspaper article reveals that Pearl “came to her senses” after she experienced abuse from Basil. She had divorced her husband so that she could marry Basil and it appears she lived to regret that decision. The newspaper article (March 26, 1937) stated, “Mrs. Pearl Foote Requests Divorce, Wife Declares Ex-Evangelist is Cruel to Her, Wants Old Name Back.”

Perhaps she thought she had found her savior in Basil and then later realized that she had eaten of the tree of bitter fruit. The later newspaper articles reveal that Basil abused her too. Basil abandoning his family, not only directly impacted his wife and children but another family beside his own. My grandfather made choices that kept his children and grandchildren from inheriting blessing (positive consequence) in their lives. Having followed the way of self-gratification he brought a curse (negative consequence) upon his own descendants and shamed the Foote families. There are numerous newspaper articles that I have not posted because of space that reveal Basil consistently badgering and abusing women.

How then, did my mother perceive the unlived life that accompanied her lived one? When she peered into the portal of her intuitive imagination, did she feel overwhelmed by its undaunted affliction? I have often pondered if my mother possessed the tenacity of her offended youth to exit the other side of this pernicious portal of revelation. As I contemplate it, I know now that she did, for her revelation was ameliorated through me. She had many husbands of ideal public machismo or consummate archetypal masculinity, but lastly, she settled on a hardworking, gentle immigrant and his articulated potential of a prodigy. This man, my father, was a man of prodigious industry, holding a divergence of labor with a primary role at the American Smelter’s and Refining Company, a part-time role with Boone Brothers, and an entrepreneurial interest in partnership with a tavern where he met my mother for the first time.

This is where my story begins. They married, as their union adjudicated my conception as something to be honored. My mother projected her portal of hope upon my life, hazarded by her own humanity, unconsciously twisting and distorting the dream she held so preciously at my birth. She attempted to give me a gift she had never received that felt to me like a curse. She had not known life without a curse and she was trying to bestow upon my young life something she had not experienced, but only imagined. In her flawed interpretation of the gift, I reaped her obtuse protections, projections, and expected outcomes. She labored to give me what she could only see through a distorted lens. Like Nell, who learned to talk from a mother who suffered a stroke, I learned my blessing from a woman whose own sacred divinity was violated. 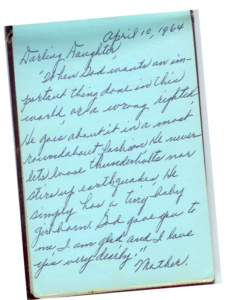 She carried the burden of Basil Foote and in distorted harmony, tried to set me free. She attempted to make me inviolable in a volatile family. Her infringing protection was the product of her disenfranchised understanding. While perusing an old “memory book” of personal treasures, I discovered a vestige of my mother’s heart’s intent. A little patch of blue paper with a note of introspection, sweet sentiments written in reflection of my birth. This was a moment of vulnerable effort to articulate the blessing she harbored for me.